Our hospital’s history goes clear back to 1946, and even as the practice has evolved and grown to encompass the latest in veterinary technology, we’ve always maintained a focus on the values that matter most - high-quality veterinary care, client service & communication, and quality experiences for animals and owners alike.
Book An Appointment

Introduction To Our Practice 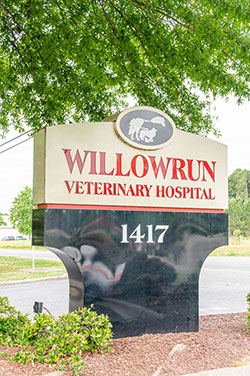 Willowrun Veterinary Hospital has a long and proud history of serving the Smithfield, North Carolina area.

Our founder was Dr. Ed Boyette, who began practicing veterinary medicine in 1938. In 1946, Dr. Boyette entered into a partnership with Dr. Charles "Bug" Swearingen to form Willowrun Veterinary Hospital. They built a brick building about one mile north of our current location on US Highway 301, which was then called Truck Lane, and is now Brightleaf Boulevard. Dr. Swearingen bought Dr. Boyette’s interest in the practice in 1952, and that same year Willowrun became one of the first veterinary hospitals to receive accreditation from the American Animal Hospital Association.

In the early days, Willowrun was primarily a veterinary center that catered to large animal clients on their farms. Over the course of Dr. Swearingen's stewardship, which lasted until his retirement in 1985, the practice cared for an increasing number of companion animals, reflecting Dr. Swearingen’s love for them.

After Dr. Swearingen's retirement, Apex Veterinary Hospital purchased the practice and gave leadership to Dr. Kurt Zimmerman and Dr. Willie Smith. Six years later, they were joined by Dr. Eileen Langdon and together purchased full ownership of the hospital. Shortly thereafter, Dr. Zimmerman was chosen to serve as a professor of pathology for a highly respected veterinary college, leaving Willowrun in the capable hands of Dr. Smith and Dr. Langdon, who are the practice’s owners to this day.

In 2003, Willowrun reached another milestone by relocating to its current location, enabling Dr. Smith and Dr. Langdon to treat patients in a comfortable, spacious and top-of-the-line hospital.

Most recently, in 2019, Willowrun welcomed Dr. Jacob Hammond as one of our practice owners. We look forward to continued growth and development as a place of healing where compassion, love of animals, and community meet.

Located on S Brightleaf Blvd between E Wilson St and E Stevens St. Directly across from Harper's Flea Market Mall and next to The Mulch Yard.

Send Us A Message!